Last night I read an article in New Scientist, the general gist of which is that we all prefer advice from a confident source, even to the point that we are willing to ignore a poor track record.

Well, I’m not sure that’s true about scientists in their domain of expertise, but I don’t for a moment think we’re any different in fields where our confidence in our own expertise is lower (and I like to think we’re slightly better than average at measuring that … but, see below …)

The article goes on to say:

With complex but politicised subjects such as global warming, for example, scientific experts who stress uncertainties lose out to activists or lobbyists with a more emphatic message.

And less than twenty-four hours later, Steve Easterbrook has a really thoughtful and inciteful (is that my word of the week), post on incompetence and awareness, drawing on some psychology research. With apologies to Steve, I liked it so much that I’ve nicked the graph that he nicked: 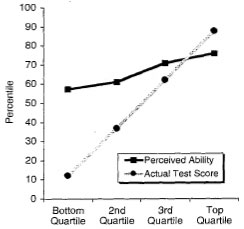 and the strapline he put with it:

while noting that he was summarising original research, which I haven’t read :-).

It would be a recipe for disaster, were it not for the fact that not all decisions are made by those who have a propensity to overrate confidence and ignore competency (i.e. the general public). However, decision makers also need to be confident enough in their own decision making to ignore majority opinions (based on confident incompetent advice). The problem there is that the payback (on making unpopular decisions) is generally longer than the electoral cycle …

“thoughtful and inciteful (is that my word of the week)” - did you mean that? Insightful I could understand. Or does it incite you to do things? Or is it full of citations?

Well, I meant insightful when I first typed it, thought it looked a bit wrong, and then rather liked the alternative connotation … he does incite me to read stuff which I would otherwise not bother with (or know existed) … :-)

I’m inspired. I will try to be inciteful more often… [PS thanks for the shout-out!]