Recently I heard a talk by Kevin Trenbeth, who showed a slide with the following cartoon:

It was perfect in context, but I also found it amusing in a serendipitous sort of a way: just before he started speaking , I had started (in a coffee break I hope) googling for images of reservoirs, hoses and sprinklers … because I had a similar idea in mind, and I wanted an easy way of communicating it.

However, my idea was and is rather different from Kevin’s. So why is it different? Firstly, mine was borne out of Ian Jackson’s repeated mantra (on the NERC information strategy group) that a water-pipe system is no good without water, and my repeated response, and without a pipe system, the water just gets wasted. We were both right of course: a water delivery system is useless without water, and water gets wasted without a delivery system.

To some extent Kevin’s image is redolent of wasted water, even though there are clearly components of a system … but I’d put it slightly differently:

So here is my graphic:

We are being encouraged to put more and more effort into the front end - the portal, the visualisation system - to the detriment of the backend (the managed archive, well connected, with standard interfaces). 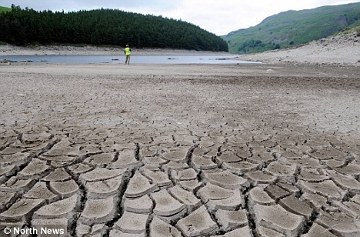 Nor will it end well

(I’m well aware I need some picture credits on this post, since I made some serious use of other peoples pictures … please let me know if your picture is here and you would like a credit - or for me to remove it.)

great analogy. With fat pipes everywhere (dumb pipes will do nicely) we can keep the water on full belt and move the data all over the place, to where its needed. Bring on the fibre. chris