One of the outputs of the IS-ENES project is to be a foresight document outlining where European Earth System modelling should be going in the next decade or two. Of course foresight exercises are fraught with difficulty … but we need to try, especially for ESM, where the lead time on developing a really high end model is probably of the order of 10-20 years, and where supercomputer procurements are multi-year events.

So, there was a meeting near Paris earlier this week that I attended. This blog post is by way of a summary of my take on some of the discussion. It’s absolutely not a summary of the meeting, or a prediction of the eventual outcome of the exercise.

Currently, high end climate simulations require significant HPC, but because many climate models don’t scale well on massively parallel supercomputers, we can’t always use the most “capable” HPC machines. So many of these simulations are considered to be “capacity” computing problems: lots of computing is needed, but they don’t necessarily require (or can’t always use) the highest “capability” machines. However, as we increase resolution and/or complexity in models that do scale, the problem does become a capability problem, they can only be done on the highest performance machines. (That said, often relatively poor scalability goes hand in hand with relatively poor portability, so even if several high end capacity machines are available, the porting effort required tends to encourage running ensembles on one very high end machine: turning capacity problems into capability problems.)

Whenever climate modellers get together we bemoan the simulations we can’t do because of lack of computing - so we’re always in the queue for access to capabilty HPC. However, we want capacity too, because at any given time even if our models were both scalable and portable, we’d be wanting to run ensembles using models at one level of resolution and complexity, and at the same time be developing models of the next generation of complexity and resolution (it takes years to move from one generation of model to the next, as it’s not only a software engineering problem, there are science issues to resolve every time we increase either resolution or complexity). So we’re always on a two track journey: exploiting what is available as capacity, and getting the next generation models ready to run as capacity a few years hence via what is currently a capability job.

To give one real practical example, John Dennis was telling us about NCAR efforts to “go petascale”, and how, just for debugging he actually needed thousands of processors because the bugs couldn’t be reproduced on less … so that’s a capability problem now, but some time in the future (maybe a long time :-), those architectures will look like capacity computing, and we’ll need the climate codes ready to use those computers.

So climate simulation problems of any given complexity/resolution travel on a path from capability to capacity, and ideally that journey involves both sophisticated software engineering and high end climate science.

In the last decades, much of the community has concentrated on “mitigation” class problems, which are generally of the global scale, and for which global scale models with grid resolutions of hundreds of km are adequate.

Now society and more and more scientists, are turning their minds to the “adaptation” problem as well - we know we’ve got a certain amount of climate change in store (and probably a scary amount), and we need to work out what and where the impacts will be. But the truth is our global scale models aren’t yet suitable on their own for answering these questions, and we think that’s a function of both complexity and resolution. Hence there are a variety of approaches to dealing with the divergence between our ability to predict climate and our our requirements for climate predictions at human scales (typically km or less).

Additionally the impacts on the human scale (cities, catchments, mountains etc) need to be further calculated using “Impact Models” which are tailored to the problem of interest.

In the best of all possible worlds, we’d run our global models at a sufficient resolution to resolve the important weather scales (not to predict weather per se, but so we can be confident that the statistics of the weather in our models will behave correctly as the climate changes), and we’d run impact models using statistics generated from those models.

How do we get there?

One of the breakout groups at the IS-ENES meeting was considering exactly that issue. Clearly our goal should be able to eventually run predictions at the global scale using whatever resolution is necessary to resolve “weather scales”. We suspect that’s down near the 1km scale (and know it’s certainly below the 50 km scale). But we also know that we only want as much resolution is necessary, and no more - because if we don’t need the extra resolution, we want to use the extra computing power to add complexity to our models (more processes).

So, we came up with the following strategy: 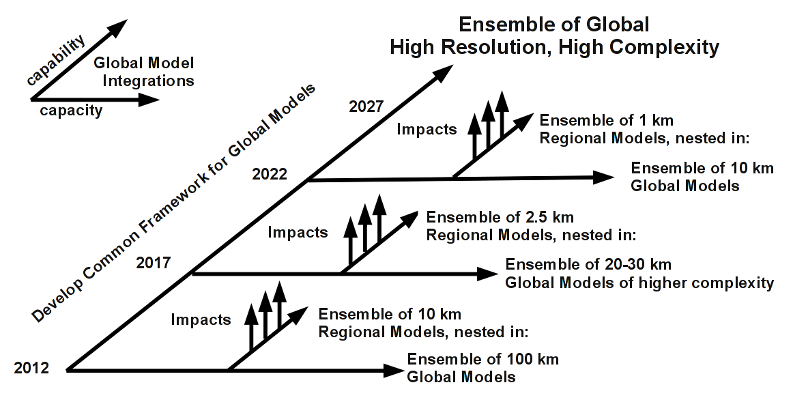 … By way of organising my thinking about increased resolution, and in some ways, following up on an even older discourse, I’ve spent a bit of time thinking about computing capacity…