The NDG b-schema is the heart of how we plan to support data browsing (as opposed to searching).

The key concept is that we have a simple relationship between observation stations (ObsStn), Data Production Tools (DPT), and Activities, which are linked together by Deployments as depicted below: 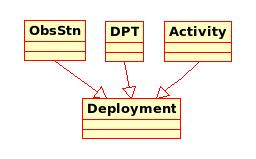 Examples of how it could work would be