We’re in the process of documenting a specific model intercomparison project (MIP) for the purposes of the Rapid programme. It’s the same issue we have for CCMVAL[^1], and for metafor in general.

The issue is what metadata objects need to exist: Never mind the schema, what’s our world view look like? It looks something like this: 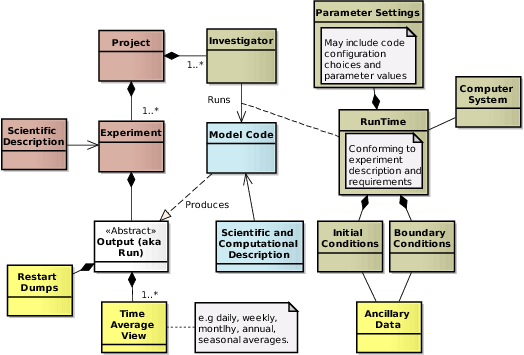 Beyond the classes and their labels, one of the key features of this diagram is the colour of the classes, which is meant to depict governance domains of the information (sadly, at the moment, the governance of the metadata itself is all down to us).

Now some folk go on and on about repeatability of model runs. Sadly, very few model runs are bitwise repeatable, not only is there not enough metadata kept, but generally the combination of model code, parameter settings, ancillary data, and computer system (with compiler) is generally not even possible to re-establish.

Personally, I think that’s ok (it’s just not practicable for sufficiently complex model/computer/compiler combinations if the elapsed time is anything much above months), but what’s not ok is for a model run to be unrepeatable in principle: that is someone ought to be able to add a new run which conforms to the experiment and for which it is possible to compare all the elements depicted here. We ought to have kept the data and the metadata. We really ought to, and we ought to understand how to construct a difference.

Hence metafor, but right now, we just want to make sure we describe our Rapid data … [^1]:that link doesn’t exist at the time of writing, but it will :-)

… discussing the UML describing such projects (which appeared in the previous post). In doing so, we managed a few simplifications and fixes to my UML …