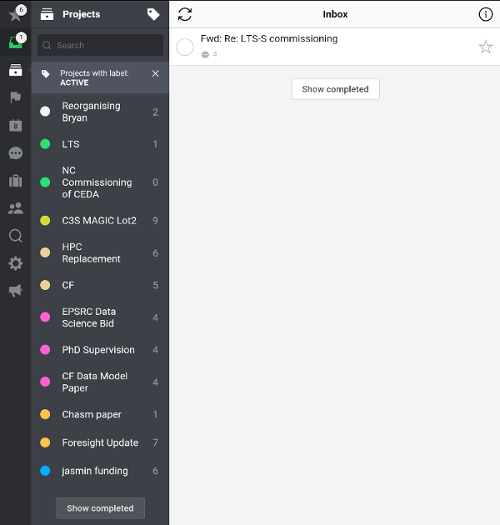 Well, to answer that, I’m going to start by going back a couple of years: back then, in Jan and Feb 2015 I was looking at Pagico as a “getting things done” (GTD) tool. I ended up not choosing Pagico, but I did within a few weeks settle on using nozbe …

… and I’m still using it, nearly every day! The picture above is a screenshot of my active projects this afternoon, most of which arose from deadlines from last year.

Without (today) getting into the details of how I use Nozbe, I’ll just say that this was the list of projects which I expected at the beginning of the week that I might want, or need, to be working on during the week. (There are loads of other projects I’m working on, or need to work on, that are managed in my Nozbe, but I didn’t expect to have to put a lot of work on them this week, although the odd task did come up and get done). Of course, in the best traditions of what Harold McMillan might have said, and Helmuth von Moltke did say, my plans don’t always survive the inbound email and the demands therein, but you have to start somewhere …

As it happened, I didn’t need to work on all of those things this week (LTS), or didn’t find the time (C3S Magic Lot2, chasm and foresight, so I’ll explain those a bit more when I do have something to say) - which in the case of chasm and foresight will of necessity be after next week, because things have to be done on those next week.

So this week, I did spend time on

I also processed a lot of incoming email. “Processed” in the sense that I did one of the following things with all of it (thanks to Nozbe I have nearly email inbox zero):

Not a very exciting week, but a lot of important (I think) stuff done. I hope that some of the thing I have to say in future blog posts will be more interesting …