There is a fascinating article by Davis et.al. in Science on Antarctic Ice thickness. There is also a perspective piece by David Vaughan of the British Antarctic Survey. The gist of the substantive article is that some parts of the Antarctic land mass are thickening while others are thinning (the results are based on radar altimetry measurements over eleven years). Not surprisingly, they link the thickening versus thinning to precipitation changes. Leaving aside the implications (evidence for climate change and concommitant sea level rise which are the main thrust of the paper [^1]), one of the things I find most interesting is how good the ERA40 precipitation measurements are! The following image shows the ERA40 snow precipitation (left) and ERS elevation changes (reds more precip, snowmass increasing, blues, less precip, less snowmass): 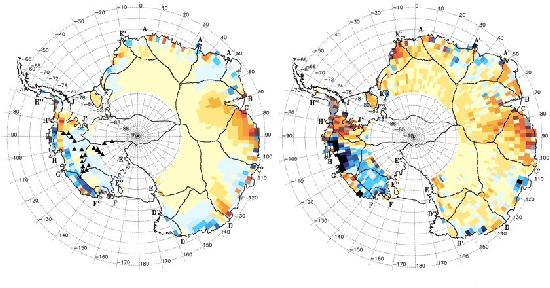 Given that there are nearly no precip measurements going into ERA40 at these latitudes, it shows that the precipitation physics in ERA40 are rather better than I thought they were, although, as the paper points out, the magnitudes are not as good as the spatial patterns (and some of the differences in some areas are due to ice dynamics).

(As usual the figures have been degraded in resolution and have had the colour scale removed to comply with my copyright fair use criteria). [^1]: Ok, I can’t completely leave it aside, the bottom line is that east Antarctica is thickening - as predicted by models - and west Antarctica is thinning, with a predicted net effect that the thickening area could offset some (but not all) of the predicted sea level rise from ice melts elsewhere. Read the Vaughan piece for the full detail

Bryan (on Monday 02 November, 2009) These images compare model data with satellite data. I think the orbit of this satellite precludes viewing to the pole, so that explains the gap in the ERS data, and the model data has been sampled in the same way as the satellite …