Next week there is a meeting which I hope will finalise the data requirements to participate in CMIP5. I can’t go, but there are a number of issues on the table which I care about, I’ll try and write about each in it’s own blog post, which you’ll be able to find by looking at my (new) CMIP5 category page.

PCMDI is leading the development of a global data archive federation to support CMIP5. It needs to be global: conservative estimates of the volumes of data to be produced for CMIP5 are that there will be PB produced in the many modelling centres involved in producing conforming simulations. Within those PB of data, certain variables, periods, and temporal resolutions of output are going to be defined to create a core archive. We hope that it will be about 500 TB in size.

The global federation being put together will federate 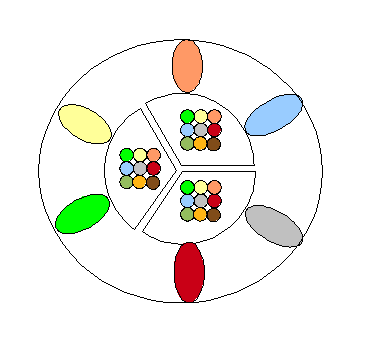 (the schematic has nine modelling groups, six in the federation, but in reality there will be many more and the distribution between the camps is not yet known, in particular, while the diagram shows an equal distribution between modelling centres and cores, we expect PCMDI to ingest most of the data directly as was done for CMIP3). (Clarification added 11/12/08.)

BADC expects to have three roles in this activity, we will be

I hasten to add, all the core partners will be deploying services to help prospective users by producing simple diagnostics and subset the archive in may different ways - so as to avoid crippling download volumes!