Silence is golden, so this must be a golden blog … the last month I’ve either been head down over the keyboard slaving on the development of a tool to collect descriptions of the models used and simulations produced for CMIP5, or on holiday. More of the latter soon.

Meanwhile, as I sat in the backyard on Sunday afternoon, supping a Grove Mill Sauvignon Blanc, my head fell backward as it is want to do, and I gazed at the contrails decorating our sky. They often decorate our sky, which means amongst other things that a) we seem to sit under the entry flightpaths for a lot of routes into Europe, and b) our sky is often clear enough to see them … but that those two factors are not unrelated. Sometimes our sky isn’t clear enough to see contrails, because it’s full of clouds made up of … dispersed contrails! 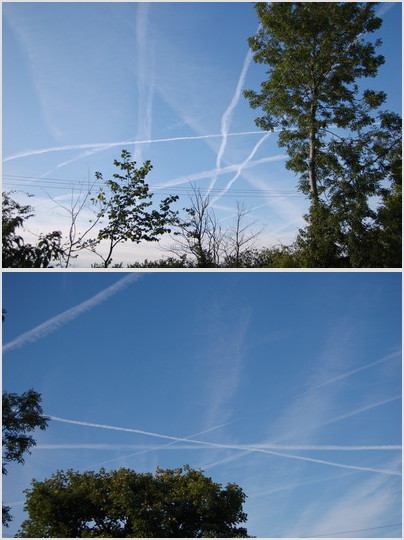 Looking at them reminded me of their radiative importance, and influence on climate. The literature used to be full of stuff about it, ten years ago, but things seemed to have moved on. A couple of numbers stuck in my head though: Mannstein (1999) found in an algorithmic analysis of AVHRR derived contrails a global mean annual contrail coverage of 0.5%, with significantly higher values in some times and places (and this is itself a factor of about 50-100% less than other manual analyses). I vaguely remember figures as high as 6% for central Europe at some times (but can’t track down the reference quickly). One also has to remember that these numbers have to be an underestimate, because as they spread out they become less detectable, and obviously the presence of other clouds can both mask such contrails or, indeed, be caused by them.

So, we send Gadian flying to make endless contrails as an alternative to his geoengineered cloud ships!

The problem with condensation trails, is that you are doing far more than making white clouds. You are producing the gases which cause the problem.

There is also another problem in that there is a balance between Shortwave reflection and Longwave absorption of radiation .. i.e. quoting from wikipedia……..

“On the other hand, cirrus clouds have a warming effect on the global climate, because they trap more longwave radiation (emitted by the much warmer Earth surface) than they block incoming solar radiation. In other words, the sign of the regional climatic impact (cooling or warming) of contrails is uncertain.”

Even though with contrails, “a reduction of solar irradiance at the surface by 3 to 5% (depending on the wavelength) has been measured at Lausanne”

Yes, the radiative effect is complicated, altitude matters etc (there are papers on the affect of changing flight altitudes and paths etc). I think the generally accepted idea at the moment is that the net effect of existing contrails results in a warming not a cooling, but it’s a small number that results from differencing large numbers …