I’ve just been reading “How well do we understand and evaluate climate change feedback processes”, by Bony et.al. (2006) which appears in the Journal of Climate.) While I’ve delved into GCM cloud physics in the past, I’ve never really taken the trouble (beyond this) to get into cloud feedbacks in the climate sense, I’ve been happy to accept the received wisdom that cloud feedbacks are the dominant uncertainty in climate sensitivity, but that most folks (Lindzen apart) believe that despite their uncertainty, the sign at least is very probably positive, that is to enhance the affect of increasing CO2 on surface temperature.

This post is by way of notes from half a day following my nose down the rabbit hole, because for various reasons, I need to educate myself on the issue.

(Nothing to do with why I wanted to read the paper, but something I’ve been interested in for a while.)

Bony et al have an interesting figure which is actually a figure from an earlier paper by Carnell and Senior (1998), which got a mention in the TAR. 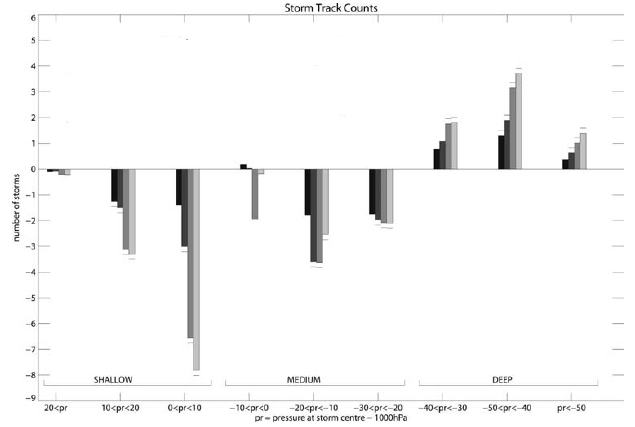 As far as I can tell, this paper is close to the basis (see something like 90 citations) of the oft repeated statement that we expect storms to be less frequent but more intense in a future climate.

There have obviously been many follow up papers with other models, including for example, Leckebush and Ulbrich 2004) who in an analysis of GCMS and RCMs found (according to their abstract):

A bit of googling resulted in an interesting powerpoint by Ruth McDonald which reviews a lot of similar studies … and then I managed to get hold of Lambert and Fyfe, 2006, which has an analysis making the same point using a CMIP3 multi-model ensemble: 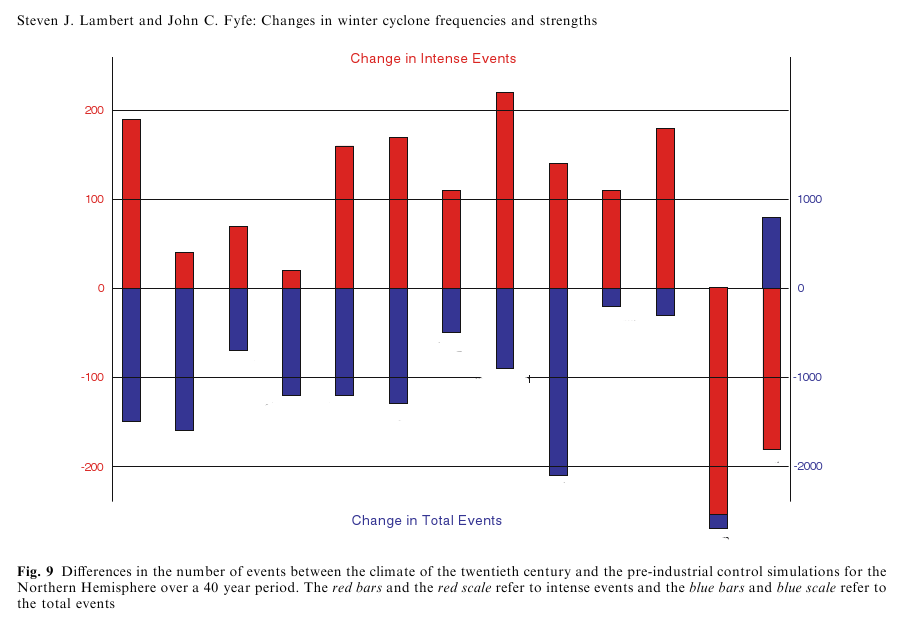 Key changes in clouds in a future climate

(This is what I was after):

At the same time however, we have reference to Zhang et al, 2005 which took me off on another riff, but that’s a topic for another day.

(this is what I remain most interested in, science-wise, should I ever get any time to do any science myself ever again ….)

One of the things I’m looking forward to getting out out of metafor is a decent summary of what the current state of play in cloud parameterisations is in GCMs … I’ve been out of it for just long enough that it’s hard to get back in … a souped up version of the following table (for just three models, from Wyant. et.al.2006) for all the CMIP5 models should be just the ticket:

Papers I now want to read

For these I could only read the abstracts, due to the paucity of support for climate science in my institutional library (which is great for high energy physics, apparently, but crap for climate) … I’m glad that I could get to most of the others via self-archived pdfs (yes, I could get to some via our library subscription!)

(Note that the figures and table have been downgraded in quality by removal of information, consistent with my fair use policy.)