Anyone reading my twitter feed will know that I’ve been going to strategy meetings a lot lately. We’ve been talking a lot about the impending problems with computing as new architectures become more complex. By way of organising my thinking about increased resolution, and in some ways, following up on an even older discourse, I’ve spent a bit of time thinking about computing capacity. Hence this. 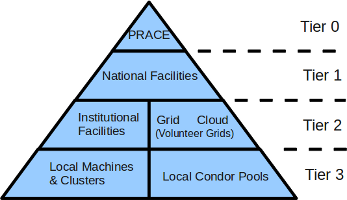 Here we see that Tier0 are the fastest supercomputers available, typically in or close to the top 10 in the world (currently, in Europe, that would mean a PRACE supercomputer, although sometimes ECMWF squeaks into or close to that category, when they have a new computer).

Tier1 computers are typically the fastest computers available nationally for academic use (in the UK that would be Hector). ECMWF is also tier1. Tier2 computers will include institutional supercomputers and the sorts of computers deployed at the Met Office Hadley Centre and DKRZ (although occasionally, when new, they might rank as Tier1).

Large clusters are typically available in institutions too, and often access to these can be achieved via Grid tools. Volunteer grids (access to the personal computers of volunteers via services such as BOINC) are also available. The total amount of computing power available in volunteer grids (measured in FLOPS) exceeds that of the Tier0 supercomputers, but I’ve ranked it as Tier2 here because there are major limitations in what can be done with data flow with such computing - but even so, projects such as climateprediction.net have shown remarkable ability to exploit that environment.

Tier3 computing is what is typically available to a workgroup, which might include local condor pools.

To try and get a grip on trends on what climate computing will be available in in the next decade or so, I’ve been reading this useful SCIDAC review (if you’re at all interested in HPC computing futures, it’s compulsory reading). Following their figure 2, I produced this one: 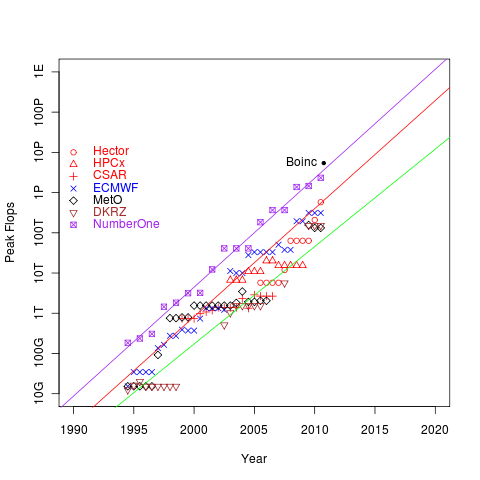 There are some interesting conclusions one can draw:

With those gross generalisations in mind (and hoping the financial situation doesn’t impede capacity provision), let’s return to how increases in computer power can be used by the climate community. Folks have been showing a variant of the following figure (from Tim Palmer at ECMWF) for a long time: 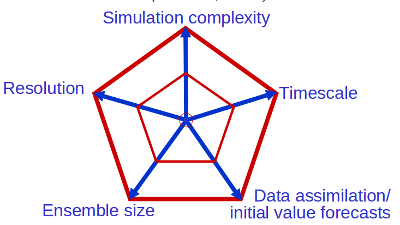 The bottom line is that extra computing can be used in a variety of ways:

… and all of them are important to different parts of the spectrum of questions we need to answer, for example:

(For discussions on uncertainty in models, I highly recommend these web pages.)

Not all of these options are equal in our ability to exploit new supercomputing. As hinted above, even now, climate codes can’t necessarily exploit the new computer architectures to either run faster (by using more processors) or go to higher resolution (using more processors), since they don’t necessarily scale well. This has actually been a problem for a while, but it’s been sort of hidden since of late the science drivers have been to more complexity and more ensemble members, and those avenues have tended to better exploit more processors. However, with an increased interest in adaptation and the desirability to do longer runs, comes a necessity to make our models scale. (Really long duration runs at high complexity are going to be a problem, we can’t parallelise in time, yet …)

Of course we can always choose to back-off and loose complexity or resolution to make other kinds of problems doable: for example, really long paleo runs are generally done with lower resolution models with more parameterised physics (but sometimes more complex carbon cycles). Similarly, by staying at lower resolution, climateprediction.net has taken the philosophy that more experiments and more ensemble members can be exploited by using volunteer grids. All of these approaches are valid and useful.

Looking forward however, we do have a problem. If we want to be able to choose which of these avenues to pursue on science grounds rather than computing capability grounds, we need to understand what that computing capability is going to look like, and plan accordingly. More of that anon, when as you might expect, a bit more discussion of data implications will appear.