For once I’m reading some real scientific literature. I’ve been pretty appalling lately, with my RSS aggregator telling me there are about 1400 items from Science and Nature alone that I should have a quick look at (As well as telling me that I’m not spending enough time keeping abreast of developments, I think this also tells me that I need to use some different software - something that does keyword parsing).

Anyway, today, I felt obliged to catch up on some key details of the solar climate link, and in particular, the solar side of things. I’m reading: Solar variability and climate change: is there a link?, by Sami Solanki. This is all stuff I should have known, and indeed have wittered on about before, albeit not in detail.

Key points from this paper are that

Having discovered their public website, I also had a look at Solar total and spectral irradiance: Modelling and a possible impact on climate (N.A. Krivova & S.K. Solanki 2003, ESA SP-535, 275-284). An interesting figure, and accompanying discussion from that paper was the one which showed that the recent flurry of interest in cosmic rays and clouds cannot explain the last thirty years of temperature increase either: 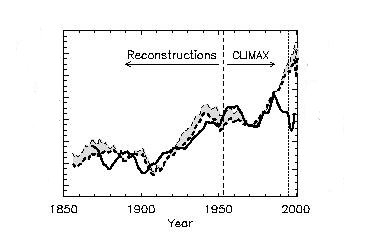 (the y-axis information has been removed to comply with my fairuse criteria, but the solid curve is the cosmic ray flux, and the other curves are the climate record).